Mafia, Yakuza, Cosa Nostra and Triads have always been symptoms of a corrupt justice system or a rotten understanding of justice instead of the sickness itself. People gathered up and stuck together to protect themselves against racism, exploitation, injustice and repressive state apparatuses they were suffering. All these threats and the lack of a governmental help have changed the way people search for justice. Francis Ford Coppola’s movie The Godfather (1972) starts with a depiction of this background. Mr Bonasera who cannot find justice for his raped and beaten daughter, comes to see Don Corleone in search of justice. His “belief in America” (00:01:15) is shattered after the suspension of the case. This shift of character and belief have many examples in the movie but it is most present in the case of lead character Michael Corleone played by actor Al Pacino. The corrupt justice system Michael is exposed to and the crime world he is a subject of makes Michael undergo a significant change; he shifts from being an outsider who is actually a War Hero to the Don -head of the mafia- of Corleone family.

Michael Corleone is introduced to viewers as a War Hero and an outsider to his family’s business. His uniform is of a United States Marine Captain, and he fashions a Navy Cross for his bravery in World War II. He comes to the wedding with Kay Adams whom he met during his time in Dartmouth College. Michael is depicted as such an outsider to criminal activity around him that he tells the story of Johnny Fontane, a famous singer, and his father’s criminal involvement in the situation to Kay. His father and Luca Brasi threatens the contract holder at gunpoint to release Johnny. Michael basically talks about ‘family business’ to his girlfriend and says “That’s my family, Kay. It’s not me.” (00:19:20-00:21:17). His image of a decent American morphs into a bloody Italian after his encounter with the police department.

He actually initiates the plan to kill the corrupt Police Captain and the Turk, the enemy of the family. For the first time in his life, he takes action for the family and sacrifices both his love for Kay and his innocence. In his time away in Sicily, he learns the death of his older brother Santino. The lack of a reaction to the news show how death and injustice have become mundane and everyday things for him. The effects of criminal involvement on his part and the loss of this innocence is ever-present after his return from Sicily what I am going to call his Second Coming. 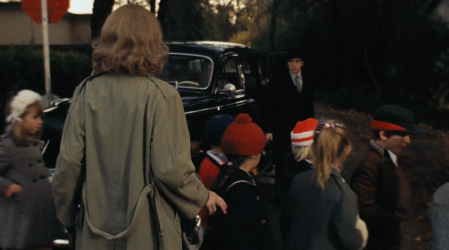 At the scene of his Second Coming, he justifies his work under his father saying “My father is no different than any other powerful man. Any man who’s responsible for other people. Like a senator or president.” (02:14:37-02:15:01). These lines show us how his ideas of right and wrong, just and unjust have changed from an average American’s to a criminal Italian’s. He firmly believes that the justice system and its members kill people as well because of corruption, racism and greed.

His Second Coming also presents his lack of remorse for killing and sense of Biblical justice that is in line with ‘Mafioso belief’ through his deeds against Salvatore Tessio, Carlo Rizzi. Michael calmly explains to Tom how he is going to get Salvatore killed and seems very unfazed by the situation Also during his visit of Carlo Rizzi, Michael cold-bloodedly states to Carlo how he is not going to kill him and not make his sister a widow. Michael extracts the information he needs and in the next scene we, as well as Michael himself, watch the demise of Carlo. Both traitors meet their end and Michael’s justice prevails.

Michael’s approach to Kay changes after his Second Coming as well. The man who used to talk sincerely and lovingly disappears. He screams at Kay, demands her not to inquire about his business and blatantly lies to her face. The movie ends with a scene that symbolizes his absolute break away from his past self, the man who loved Kay, and his coronation as the new Don, ruthless and cutthroat Mafioso boss.

The trauma of feeling helpless and severely wronged, the failure of a justice system one believes in always changes the person. Manifold injustices Michael had to face manifested themselves as catalysts in his shift from a lawful citizen to a savage crime boss. Michael used to be innocent. He was a decorated War Hero. Yet, the corrupt justice system with its racism, greed and bribery have created a ruthless demon someday they have to face; Don Michael Corleone.